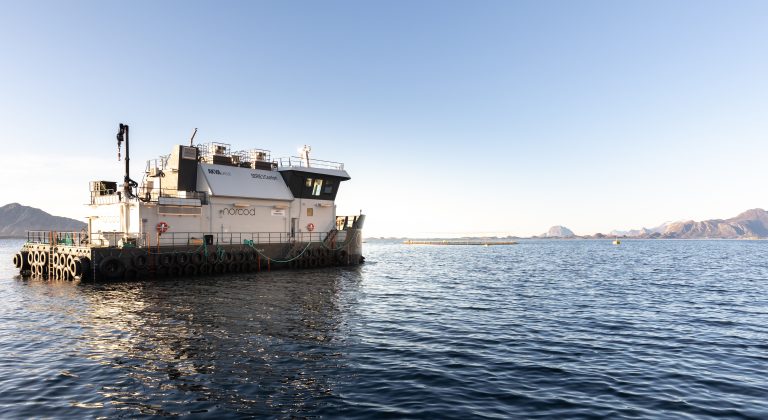 As part of its ongoing electrification programme, Norwegian cod farming company Norcod has completed a large project to implement shore power as the energy source for its Frosvika production facility in Meløy municipality, Nordland county.

“Our ambition has always been to set the standard in responsible, industrial-scale farming of top-quality cod, through constant operational improvements that ensure sustainability and fish welfare. By installing wired onshore power, we are making a valuable contribution to reducing climate impact both locally and globally,” said Chief Sustainability Officer Hilde R Storhaug.

Norcod collaborated with electricity company Meløy Energi, contractor Terje Halsan AS and the local office of Bravida Norge to implement the solution. “Frosvika now stands as a low-emission facility that is, to my knowledge, best in class,” said Storhaug.

Furthermore, the energy powering Norcod’s feed barge at Frosvika comes origin-guaranteed from clean hydropower. “These are the single most important measures to reduce the locality’s direct emissions,” Storhaug said.

Unplugging the site’s diesel generators, as well as feeding the fish using energy-efficient waterborne feeding technology, have also had a major impact on ambient noise levels. “Near silent operations benefit not only the fish in the nets and the immediate surroundings, but also enhance the working environment for our employees,” added Storhaug.

She noted that waterborne feeding addresses the potential adverse effects of traditional airborne feeding procedures by greatly reducing wear in feed pipes and the release of microplastics into the water. “Another of our sustainability goals is to continue to achieve the best possible scores on seabed environmental surveys,” Storhaug said.

The electric-powered service vessel ‘Hilde S’ in use at Frosvika since April also contributes to reducing noise levels, as well as CO2 emissions in the production cycle. “Switching to fossil-free operations carries a significant sustainability upside. We estimate we’ll save around 160,000 litres of diesel on an annual basis, which translates to a 420-tonne reduction in CO2 emissions related to the feed barge and the equipment it supplies with energy,” said Storhaug.

That reduction is equivalent to driving 2.1 million kilometres – or 53 times the circumference of the Earth – with a standard petrol car.

Norcod is set to implement shore power at its next production site at Jamnungen in Frøya municipality in the near future. “The configuration of shore power, electric feed barges and electric service vessel provides is the most emissions-reducing equipment set-up seen to date in Norwegian aquaculture industry. This strategic approach to procurement remains our priority,” Storhaug said.

Local value creation has also been high on agenda Norcod’s sustainability agenda since its inception. Its presence has generated positive turnover in terms goods and services in the communities where its facilities are located. “Just in one year of operation in Meløy, we have spent NOK 4.5m [EUR 429,000] on local procurement, as well as sponsoring cultural and sporting events,” said Stian Myrvang, Norcod’s Area Manager in Meløy and Nesna municipalities.

He adds that the company is seen as a serious industry player that has cemented good relationships with local stakeholders. “We’re also strengthening local communities by providing employment and opportunities for young people. We now have 34 staff, four of whom are apprentices gaining valuable experience,” Myrvang said.

The company, which holds Global GAP certification, has started its second harvest period of premium farmed cod, running from October 2022 to June 2023. Norcod plans to scale up production every year in order to reduce costs while meeting growing market demand remain, and in 2024 expects to harvest more than 20,000 metric tons of product in total.